Many people take water for granted. It’s easy to expect clean cool water when you turn on a faucet in your home. TUD is dedicated to delivering this expectation to its customers. Over the years, TUD has developed extensive water transmission and distribution systems to continue to service its customers now and in the future.

Tuolumne Utilities District has released its Annual Water Quality Report (also known as the Consumer Confidence Report) covering all testing of treated drinking water performed from January 1st through December 31, 2021. As new challenges to drinking water safety emerge, TUD remains vigilant in meeting the goals of source water protection, water conservation, and community education to serve the needs of all our water users.

In 1996, Congress amended the Safe Drinking Water Act, adding a requirement that water systems deliver to their customers an annual water quality report. The Report includes information on source water, levels of any detected contaminants, and compliance with drinking water regulations (including monitoring requirements), and educational information. Click on this link to view or download the Annual Water Quality Report for 2021.

The State. Health and Safety Code Section 116885 requires TUD to compile an inventory of service lines in use in its water distribution system. TUD is asking for your assistance in compiling the Customer Side of this inventory. If you know or possibly know what kind of plumbing material was used to construct your home’s service line, from the water meter to the inlet of the house, as well as the internal plumbing material and the age of your home, please complete the TUD Service Line Inventory Survey. Please email the completed survey to: atarango@tudwater.com. 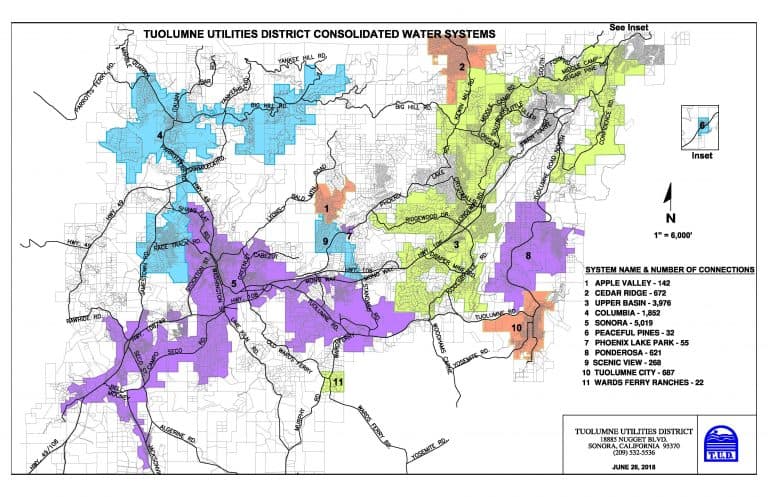 Cross-connections can be found in all plumbing systems. They are physical connections between a drinking water pipe and something that is not safe to drink – such as raw/untreated water, a swimming pool, well or gray water system. “Backflow” can happen if there is a water main break, water line repair, fire, or during a period of high water usage. These events may lower the pressure in the street enough to reverse the flow of water from your house. As required by the California State Resources Control Board, the District periodically will ask our customers to complete a Water Cross-Connection Survey. It is important that if you receive a survey that you complete it and return it back to our office. Your cooperation is much appreciated.

Many businesses and homeowners have backflow prevention assemblies (BPA’s) installed at their service connection.  These assemblies are installed to help protect the quality of water in the public water system by preventing the backflow of potentially contaminating water through cross connections.  Per Tuolumne Utilities District Water Rules and Regulations, California Regulations and California Plumbing Codes, BPA’s must be performance tested on an annual basis to ensure they are working properly to protect the district’s water supply.

WHERE OUR WATER COMES FROM

The topography of Tuolumne County varies greatly from gently rolling terrain at the lower elevations, to steep hilly uplands deeply traversed by streams and tributaries that drain south to the Tuolumne River or north to the Stanislaus River. The majority of TUD customers reside in or near the community of Sonora which is at about elevation 2,000 feet. TUD also serves customers in several communities to the east up to about elevation 6,000 feet in the Sierras and west of Jamestown at an elevation of less than 1,500 feet. Through its history, the water system, which is now operated by TUD, has changed from a utility serving mainly gold rush mining operations to one that serves the 21st century vibrant and diverse residential, commercial and industrial sectors of Tuolumne County.

TUD has a contract with PG&E which provides for perpetual water supply for TUD from the South Fork Stanislaus River. This water is stored in Pinecrest Lake, Lyons Reservoir, Phoenix Lake and other small reservoirs on the TUD ditch system. PG&E owns Lyons Reservoir and the 15.7-mile Main Canal that leads to its Phoenix powerhouse. From the Main Canal, TUD’s water splits into three branches – one serves Twain Harte, Soulsbyville and Tuolumne; and another feeds TUD’s network of ditches, pipelines and treatment plants that serve Crystal Falls, Big Hill and Columbia. The remainder goes into Phoenix Reservoir to serve Phoenix Lake, East Sonora, Sonora and Jamestown. 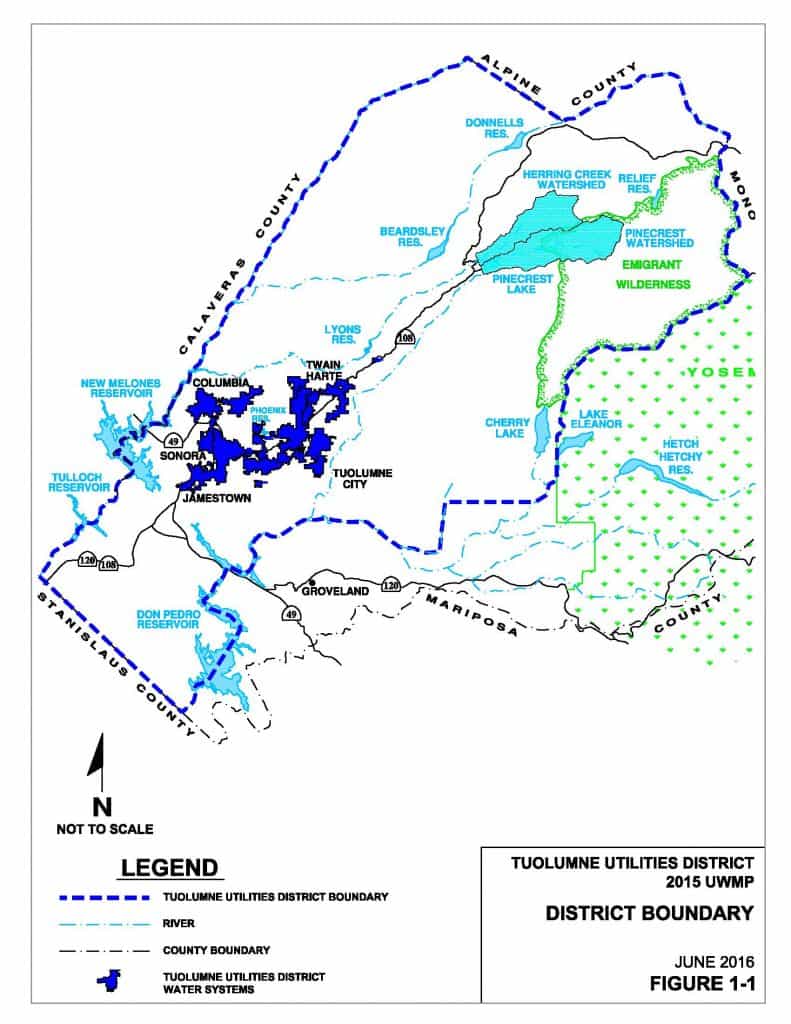 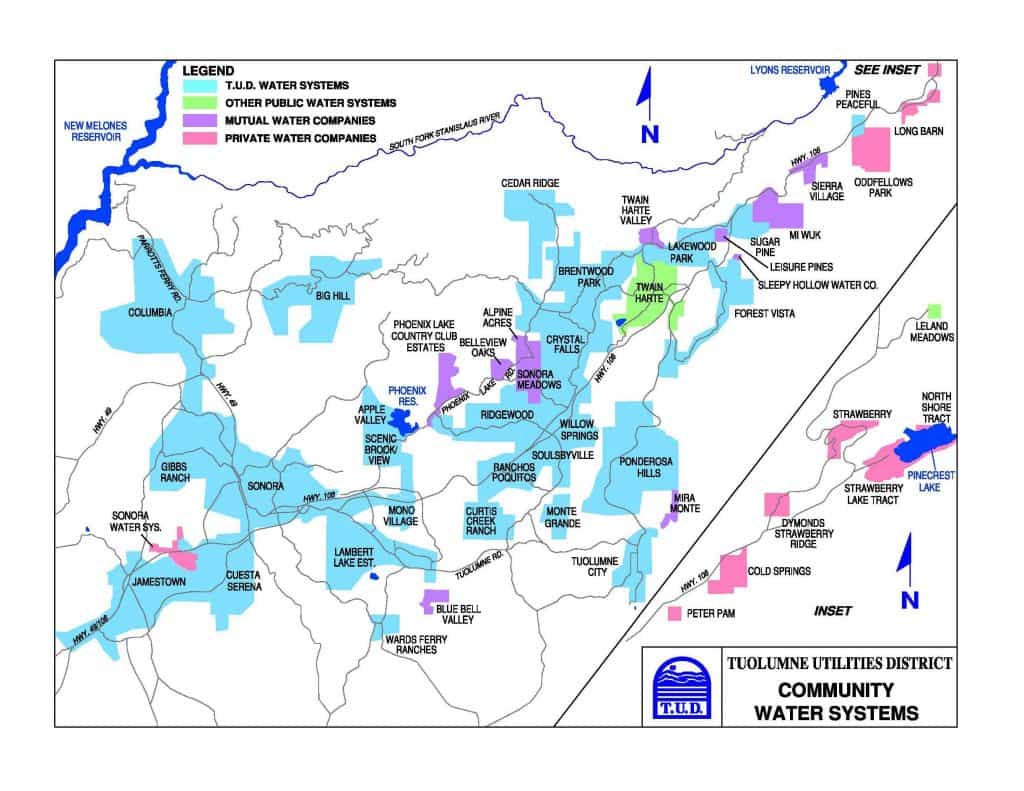 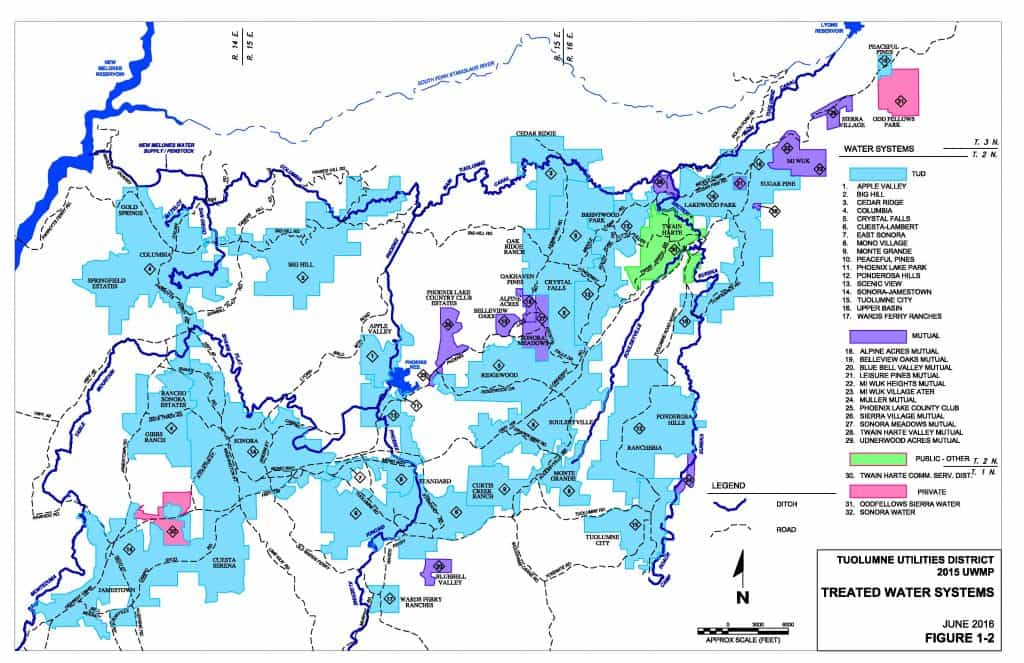 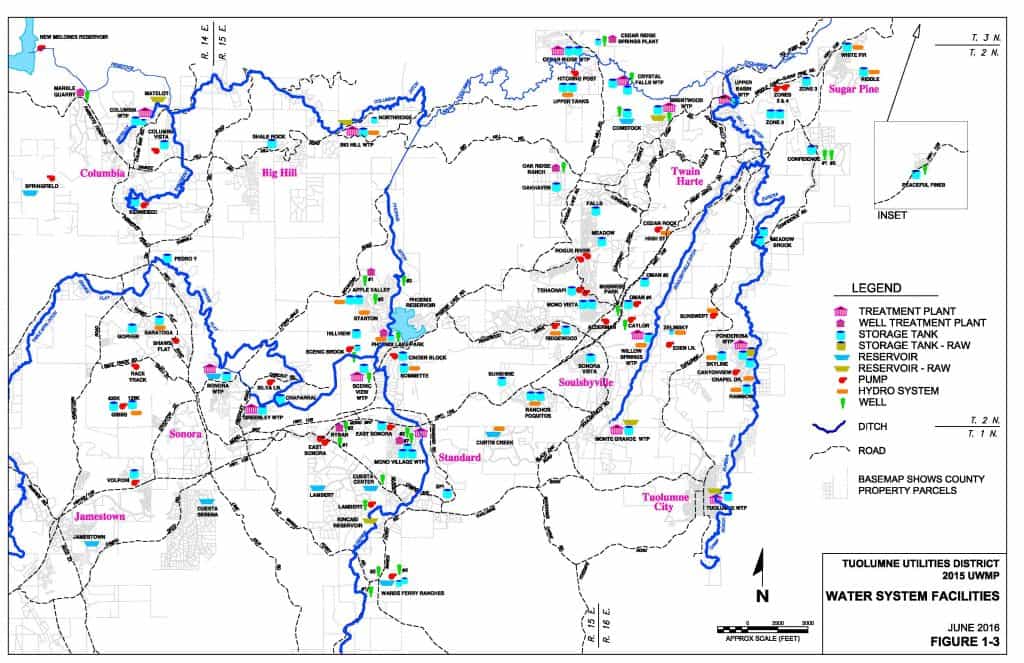 Approximately 95% of the water the District distributes originates from the South Fork Stanislaus River and is impounded in PG&E’s Lyons and Pinecrest Reservoirs. PG&E owns and operates a canal and flume system to convey water from Lyons Reservoir to the Phoenix Powerhouse. The District owns and operates a total of 72 miles of ditch, flume, pipe, and tunnel infrastructure that diverts water from the PG&E system at various locations. The District’s raw water conveyance system serves a variety of customer types and uses, including agricultural/irrigation water, ditch domestic use, commercial and industrial, resale, and raw water supply to other treated water agencies such as the Twain Harte Community Services District. The system also supplies water to 14 of the District’s own surface water treatment facilities. Raw water storage is provided in Phoenix Lake and an assortment of smaller impoundments.
Ditch System Frequently Asked Questions 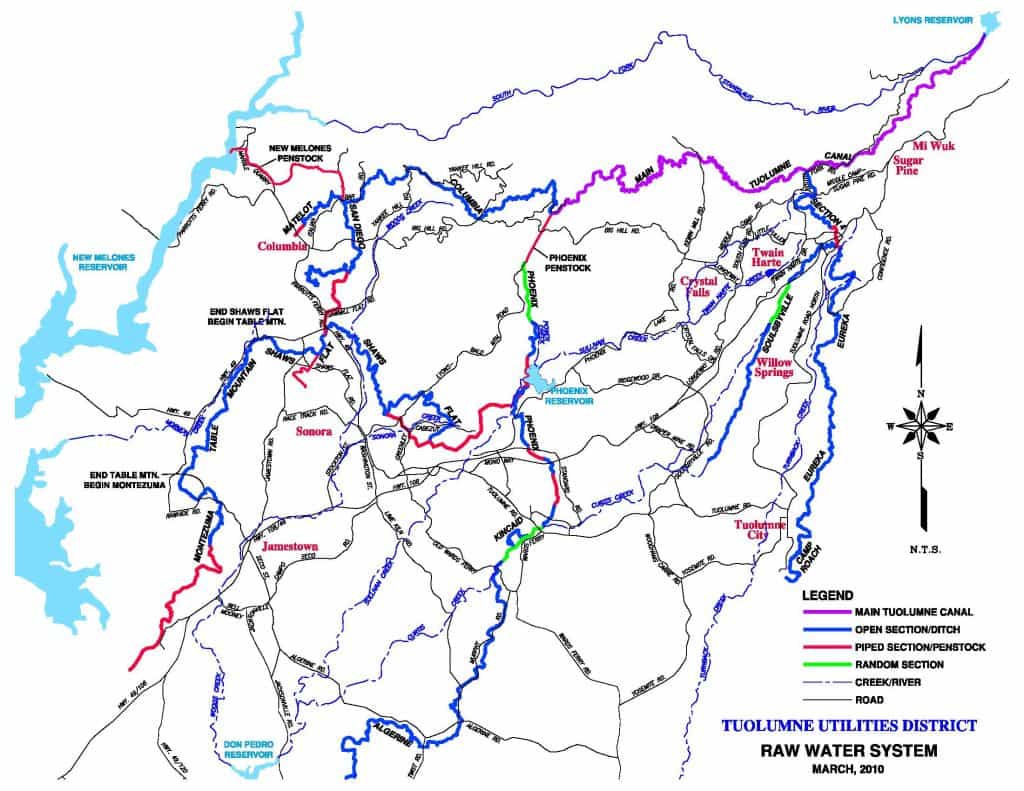